History of the War Memorial 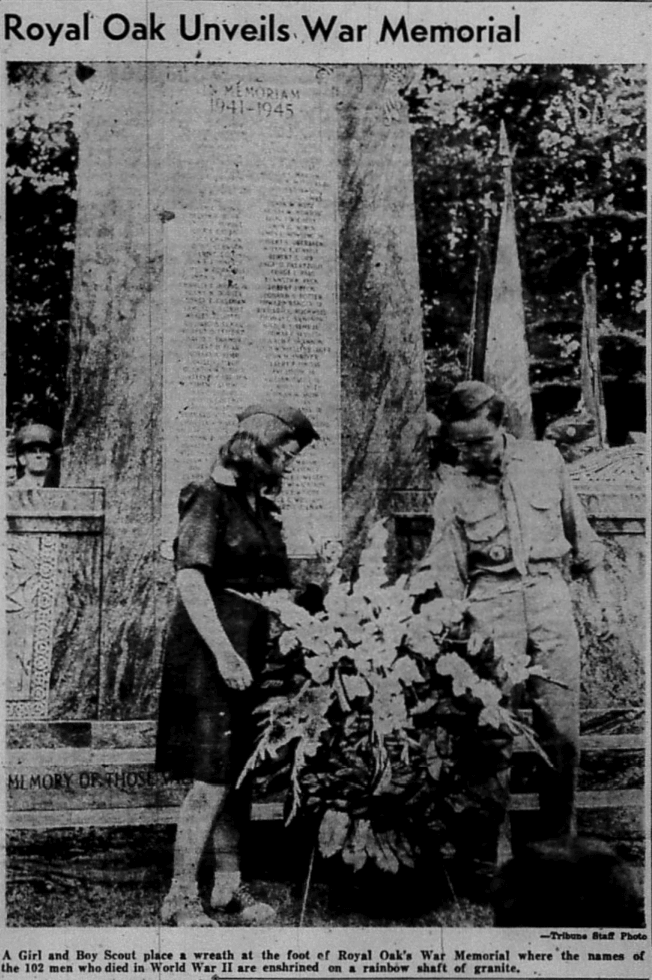 Right: Royal Oak unveiled the War Memorial on June 17, 1946 in former City Hall Park at the northeast corner of Third and Williams.  The memorial was erected as a result of the efforts of a War Council organization, appointed by the City Commission in the late fall of 1943. The unveiling followed a parade and Gov. Harry F. Kelly was on hand to give the dedicatory remarks.

Below: Twin pillars were added to the memorial to properly commemorate those from this city who lost their lives in the Korean and Vietnam wars. A dedication, with remarks by Mayor L Curtis Potter was held on Veterans Day in 1969. 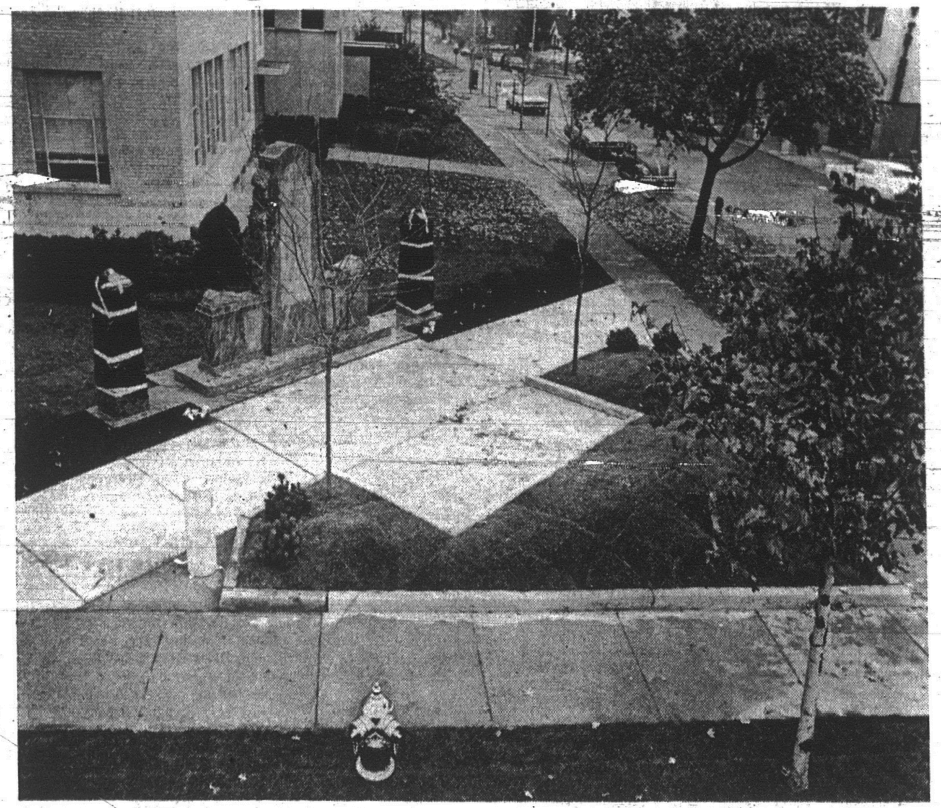 Royal Oak unveiled the War Memorial on June 17, 1946, in an area known as City Hall Park at the northeast corner of Third and Williams. On the memorial were the names of 102 men who died in World War II.

The city's former City Hall building, at 211 S Williams, was completed in 1953 on the park site. In 1969, separate twin granite pillars to honor Royal Oak residents who were killed in the Korean and Vietnam wars were added to the southwest corner of the lawn near City Hall.

In 1972, a third memorial -- a two-ton stone memorial, honoring those killed in World War I -- was added in the same general location. The heavy boulder rested for 40 years on the lawn of the northeast corner of City Hall, separated 165 feet from the markers grouped at Third and Williams.

In 1985, the Royal Oak Downtown Development Authority (DDA) renovated the parking lot in front of the old city hall. The renovations included the vacation of Williams Street, which had run from Third Street all the way to 11 Mile Road, passing in front of City Hall and the west side of the library. The city also vacated the easternmost portion of Second Street, which ran from the alley just east of Main Street to Williams Street. A wide pedestrian island was constructed within the now-closed portion of Second Street running east and west from the alley behind Main Street east to the parking lot drive in front of the old City hall. The wide island included trees, benches, and parking meters. As a part of this project, the DDA relocated the three veterans’ memorial monuments to the western edge of the pedestrian island. The three were consolidated into one connected Veterans Memorial complete with a new marble base and two flag poles.

In 1997, the City Commission by resolution named the area between the former City Hall, the Royal Oak Public Library, Troy Street, and the Veterans War Memorial as the Barbara A. Hallman Memorial Plaza.

In 2004, downtown was experiencing a resurgence of business activity including restaurants and bars. Mr. B’s, located on Main Street between Second and Third Streets,  was extremely busy. Veterans' organizations raised concerns about the possibility that the Veterans Memorial would get damaged from delivery trucks or cars entering or exiting the parking lot. The location was also inappropriate for large ceremonies on Memorial Day or Veterans’ Day since there was no place for chairs, and the setting along the alley was not as respectful as the community desired.

The DDA also paid for repairs to cracks in one of the monuments.

The city chose Nowak & Fraus to undertake a community engagement project to determine what elements the community would like to see in the new downtown park. Nowak & Fraus presented its 308-page “Look and Feel Community Engagement Report" on June 28, 2018.

Nowak & Fraus gathered approximately 1,500 individual comments about the park design through a series of events and platforms. They conducted stakeholder meetings (41 participants) including the Interclub Council, the DDA, homeowner associations, and city employees, among others; attended community outreach gatherings such as I Dig Royal Oak, Arts Beats & Eats, a Food Truck Rally, a Saturday at the Farmers’ Market, and the R.O. Library. Nowak & Fraus also held public meetings on two Saturday mornings at Royal Oak Middle School attended by approximately 300 residents, and conducted an online opinion survey in which 882 residents participated.

The “Look and Feel” report listed about 30 generalized statements about the look and feel of the park which seemed to be consistent among a majority of the public comments. These statements covered such items as the amount of greenery, hardscape treatments, possible water features, seating, possible children’s play areas, access points, connectivity to other neighboring facilities such as the Farmer’s Market and the library, lighting, locations for small concerts or other performances, the location of the Veterans’ Memorial, and restrooms.

One of the 30 statements in the report summarized the response of a majority of the responders when asked about the possibility of moving the Veteran’s Memorial. The statement says “The Veteran’s Memorial is a sacred and artistic commemoration and we must continue to pay the utmost respect to our fallen heroes. It makes sense to move the Memorial but only if there is a better place, orientation or position to enhance the overall design of both the park and the Memorial.”

2021 Memorial is Moved to New Location

The memorial was moved to its current location in 2021. Centennial Commons, which includes the Veterans War Memorial and the Barbara A. Hallman Memorial Plaza was dedicated on Dec. 4, 2021.