A 4- to 3-lane conversion, also called road diet, is when an existing roadway is reconfigured to add a center turn lane. The primary benefits are enhanced traffic safety, mobility and access for all road users and a "complete streets" environment to accommodate a variety of transportation modes. 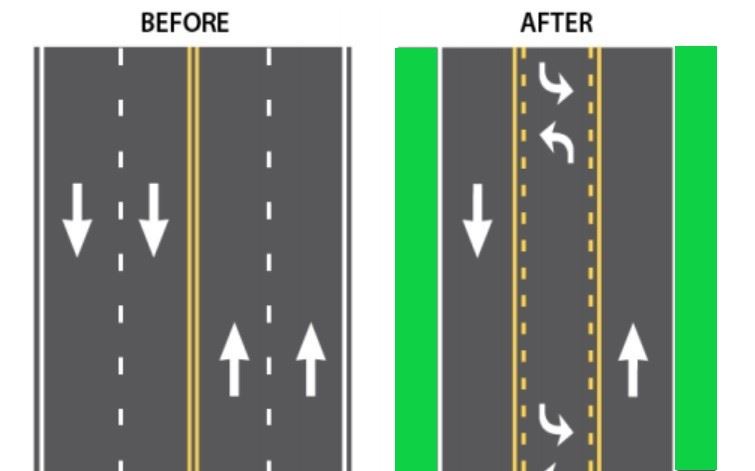 Three Is Better Than Four

The Iowa Department of Transportation put together an educational video providing information and graphics to help describe and illustrate the benefits of 4- to 3-lane conversions. Click the thumbnail to watch the video on YouTube.

No, the majority of through traffic will tend to use the outside lanes to avoid being delayed by left-turning vehicles slowing and stopping in the inside lanes. The corridor essentially operates like a three-lane road, so when they are converted to a three-lane section they are unlikely to experience a change in capacity. Studies show improved operation and safety because left turns are shifted to the center turn lane, allowing traffic to flow more freely in the through lanes. Before implementing, it is important to study the traffic patterns and capacity of the road to ensure that a lane conversion will not cause traffic backups.

Do road diets increase driveway and side street delays?

Vehicles on side streets can more comfortably enter the main roadway because there are fewer lanes to cross. This can also reduce delays exiting side streets. Road diets reduce speeds, and creates more consistent traffic flow and less stop-and-go traffic.

Drivers will be diverted to other streets.

For the majority of road diets, traffic volumes remain about the same through the corridor. Drivers tend to take different routes when there are traffic backups. Road diets are only recommended when the new configuration can handle the traffic flow without major backups. In addition, three-lane roads are generally more efficient as vehicles no longer need to stop in the through lane to make left turns.

The city converted this boulevard street from two lanes to one lane in each direction, with buffered bike lanes along the outside of the roadway. This is one of the most used bicycle routes in the city.

The city installed by north-south bike route on N. Main Street by implementing a road diet from Euclid Avenue to the north city limits. Main Street was reduced to one lane for north-south travel with a center turn lane. Six refuge islands were installed along the corridor to provide safer crossings for pedestrians.

Rochester Road is scheduled to be resurfaced from N. Main Street to 13 Mile Road in 2023. The Oakland County Road Commission had previously done a study of all major roads within the county for possible road diets in 2011 and Rochester Road was one of the recommended roadways. The road diet proposal went through several steps for approval: An outside traffic study, resident outreach and feedback, recommendations by staff and by the Citizen's Traffic Committee, and final review and resolution by the City Commission.

The city commission ultimately approved implementing a road diet on Rochester Road from N. Main Street to 13 Mile Road. The project will not include bike lanes. Instead the curbs will be moved inward to add more greenspace, landscaping and more distance between the sidewalk and the roadway. Pedestrian refuge crossing islands will also be installed along the corridor.